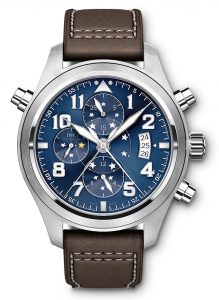 As part of IWCâ€™s ongoing collaboration with the heirs of Antoine de Saint-ExupÃ©ry, IWC has just released a new watch: the IWC Pilotâ€™s Watch Double Chronograph Edition â€œLe Petit Prince.â€ This limited edition watch of just 1000 pieces is based on IWCâ€™s regular Pilotâ€™s Watch Double Chronograph, of course, but apart from the obvious visual changes, it has a mechanical twist up its sleeve.

Before getting to the mechanical twist, let’s see the visual changes: as one can clearly see from the photos, the IWC Pilotâ€™s Watch Double Chronograph Edition â€œLe Petit Princeâ€ watch has a striking blue dial typical of IWCâ€™s other Saint-ExupÃ©ry special edition watches. It also has the three sub-dials, found on the regular IWC Pilotâ€™s Watch Double Chronograph, with running seconds at 9 oâ€™clock, and 30-minute and 12-hour counters at 12 and 6 oâ€™clock, respectively.

Look more closely, and one can spot stars on the dial, and if you are really eagle-eyed, you might notice that around the center of the dial are seven cut-out stars with one of them in gold. Underneath is actually a gold disc that jumps randomly across the seven stars each week. Although the order in which the disc jumps across a week is random, it will repeat this random order every week. As a result, the wearer can use this whimsical mechanism to tell the day of the week. The only problem is that he or she would need to mentally assign a particular star to a day of the week to be able to do so. 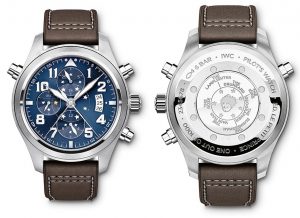 Inside the watch beats IWCâ€™s caliber 79420, which is a modified version of the venerable Valjoux 7750. The movement beats at 28,800 bph and features a split-second chronograph complication with a power reserve of 44 hours.

Those who found the regular IWC Pilot’s Watch Double Chronograph replica watches a tad too big will be happy to learn that the case of the IWC Pilotâ€™s Watch Double Chronograph Edition “Le Petit Prince” is slightly smaller at 44mm wide in diameter. The case is rendered in stainless steel and has a water resistance rating of 60 meters. The crystal is sapphire with anti-reflective coating on both sides. Finally, the watch comes with a matte brown calfskin strap with beige stitching and a matching buckle in stainless steel.